There are moments in my expat life that will be firmly placed in the memory box. This weekend was one of those moments. A one-off, surreal, pinch yourself, special experience which will be very hard to forget.

The planning, for this epic weekend, started way back in May, when a bunch of desert girls decided that a weekend away in Dubai was on the cards. We were in luck when the catalyst for actually making this happen, was Ed Sheeran announcing a Dubai gig in late November. The next thing I know, a bulk of tickets were purchased and in a whatsapp scramble I claimed our stake. Little did I know, it had turned into a 30 strong desert contingent and the party planning began. Very quickly, husbands and wives had agreed (well don’t think the husbands had much say if we are honest!) that this was going to be a weekend off from the kids and we should go all out. So over the coming months, flights were booked, hotel chosen and boozy brunch researched. Let the countdown began.

So finally the day came (which at one point was in doubt due 2 broken arms by Mr Sheeran) the desert gang communed in Starbucks before the flight and husbands finally learnt the weekend itinerary. A hop, skip and a plane later we landed in the UAE, heading straight to the hotel to refresh before the evening ahead. Of course the adrenaline had kicked in and the holiday mode was in full swing. Now it will not surprise you that the pre concert meet up was held on the roof top bar, especially when 2 days prior the concert organisers had announced that the venue would now be dry!

Can you see the irony of 30 Kuwait expats, choosing to have a weekend in Dubai, only to find out it was going to be dry?!!

So as we sat sipping our liquid treats, we were all blown away by the skyline as the sunset over this spectacular city. We all relished the change of scenery and the vast contrast to our sandpit lives, enjoying the moment and the company of our desert family. It was at this point I looked round and thought how surreal it was to be surrounded, by a bunch of people I would never have met, if it wasn’t for our move to Kuwait. It was an odd but fantastic situation to be in.

We regrouped in the lobby ready to board our pre arranged bus. This little, very Middle East style, little transit bus rolled up and we immediately thought how the heck are we going to squeeze on that! But with probably too much enthusiasm we all boarded the party bus, with laughter, anticipation and sardine esq we crammed in and headed, quite literally, to the middle of nowhere.

We finally approached the venue, which was frankly bizarre. There was nothing but desert surrounding us, mountains of sand rolled either side of a make shift dirt track

we even passed grazing camels!

So when I say desert I mean it. The process of getting dropped off was not a simple on, with the usual Middle East organisation, being told one direction and  then being pointed back to where we had just been, when we finally agreed to get off the sardine can and walk towards the ever-growing queues. It was at this point we did wonder what and where the hell are we, but we went with it (as us expats do) following the crowds and hoping for the best.

We finally made it into the stadium with only an hour to kill before the red headed lad made an appearance. Considering we had given ourselves 3.5 hours prior to the start time, which as it turned out we needed, I had envisaged we would have many hours to hang around. Now we were excited! We manoeuvred ourselves into a gap in the crowd , made our stake and bed in for the start. There was already a great atmosphere, with a really varied audience filling the 30,000 capacity venue and lets face it, how many places in the world can you enjoy an outside venue in November?

Then bang on time, the intro started and the crowd roared, as the man himself took to the stage. From that moment on, everyone was in sync, track after track he pulled you in and created a truly authentic 2 hour show. It was electric. I sang (badly) whooped and danced through the night, surrounded by my desert girls and I think even our hubbys manged a sway or two! It was absolutely phenomenal and something I will never forget.

How was I stood in the desert (literally) in Dubai, watching a northern bloke with a guitar, with 2 girls I had never met 2 years previous? It was bloody brilliant.

We left on such a high, holding hands and singing into the desert night, only to have to find our bus and cram on for another long journey back to the hotel. But did we care? Not in the slightest, it was just another element to a memory filled night, even my sore old lady back didn’t get me down as I collapsed into bed at 2.30am with melodies swimming around my head.

The next morning, tired but still on the night before high, we knew the weekend was far from over. The group was taking full advantage of an adults only weekend and had a pre arranged Brunch at Yalumba. Our 30 strong contingent, filled our tables, conversation and laughter flowed around as freely as the champagne. It was like one big office Christmas party, drinks poured, silly hats and tiaras were donned and cheesy 80’s tunes sparked dad dancing and serenades. It was yet another surreal moment, being with people in their most relaxed state, people you thought were rather constrained, were party animals at heart and our expat personas were dropped. As I looked around the terrace, seeing friends re-enacting the final scenes of  Dirty Dancing, singing at the top of their lungs, I knew they really were having the time of their life. Knowing that some of the group would be heading off to new expat adventures in the coming month, was sad, but I am so glad we got to have a wonderful send off and last hurrah. 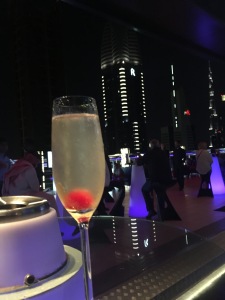 In the final moments, as I sipped my fizz, looking at skyscrapers and Dubai glittering away, I was so thankful. How was I standing here? This weekend would go down in desert history. Wow.

It was a weekend of laughter, being with friends and knowing that expat life threw us all together. As the whatsapp group fills with photos, they capture everything that is good with this life and I smile with sheer delight.