After my rant last week, things didn’t really get any better. I really struggled last week with not feeling myself, anxiety and all over wanting to just shut myself away from the world. Luckily, Hubby and I had a packed weekend planned, so if nothing else I was definitely going to be distracted and most likely lifted out of the weird state I was in.  A few weeks ago, on one of my numerous desert whatsapp groups (an expat favourite) a flyer was passed round for a charity boat cruise. I glanced at it and almost immediately dismissed it, thinking that this would be something that Hubby would avoid like the plague.

So I thought nothing of it and went on with my weekend poolside. As we were wallowing like hippos, cooling off from the desert sun, the usual chatting amongst friends and gym goers resumed. One of the desert girls mentioned in passing the boat trip and would we be going, to which I said, it didn’t float our boat! (I thought I was hilarious obviously) Then to my shock, Hubby piped up from his usual social switch off, when us girls get chatting, and declared it sounded quite good. So 15 minutes later, whilst I capitalised on his social mood and interest, I had booked us tickets.

Weeks later, as the day approached, not helped by my already nervous state, our anxiety kicked in. We had no idea what to expect, who was going or where we would be sailing to. I looked at hubby and said

Being on a boat, in The Gulf on Friday 13th, what could go wrong!?

Luckily the boat was departing from the marina only 10 minutes walk from our home, so we were relieved not to have to factor in taxis and early evening traffic. So off we went……. When we arrived at the marina, me armed with the whatsapp group and directions, we noticed many other confused faces. The thing about living here is, we expats stand out like sore thumbs and it didnt take us long to spot random groups of Brits wondering around, looking lost, phones in hand (clearly reading the same whatsapp map as me). So in true British fashion we all just followed each other and made a queue! We weren’t sure what we were queuing for but it seemed like the right thing to do.

Finally, it became apparent that our boat had been hidden by a previous one which had just pulled out the marina. We all filed like animals onto the ark, two by two, down the gang plank with a mix of nerves and excitement. I was totally calm until I spotted a friend who was armed with her very own life jacket! She explained she couldn’t swim and felt so much more comfortable having  a “just in case”, so again I looked at Hubby and said

On a boat, in The Gulf on Friday 13th, what could go wrong!?

We all gathered inside, mainly to get a blast of air con, whilst it was cooling down it was still 30 degrees at 5.30pm and hanging around on dry land had made us glisten somewhat. Very quickly I realised we knew loads of people and I was set at ease, the Hawaiian garlands were handed out (still not entirely sure why, but I went with it) and even the men were trying to colour coordinate with their outfits?!? Everyone relaxed and a hive of chatter filled the cabin, when we realised we were now a little cold and claustrophobic as more people arrived, so we ventured up on deck.

Getting up there was a challenge in itself, as I became very happy that my old lady back had meant that my high heel days were over and that my flat sensible shoes enabled me to climb the very steep, very narrow stairs to the upper deck. I went first ,as I didn’t even want to think about what state Hubby would be trying to manoeuvre in his non conordiated way up.  Once up, it was beautiful. You could see all the city lit up and the temperature, now the sun had gone down, was just perfect. It was an incredibly calm atmosphere and I was immediately relaxed and forgetting the week that was.

Pockets of conversations flowed around the groups, people taking in the views and exchanging stories, I think even at this point my friend relinquished her life jacket and started to enjoy the night ahead.  As we chatted into the night, finally the boat started to make its journey out to sea, everyone cheered and iPhones came out, all poised ready to get the Insta worthy skyline. We laughed as one person commented that

At night Kuwait looks so pretty and another quipped  that everything looks better in the dark! 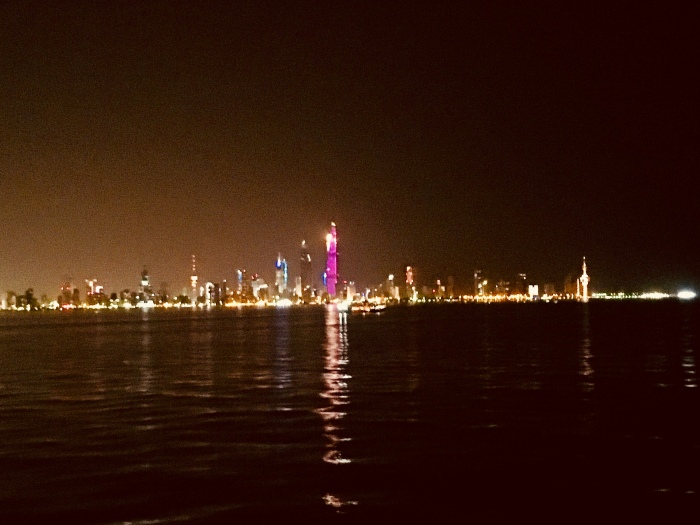 As we sailed around the top of the city, we knew there was still 5 hours left to go and yet we knew there wasn’t much further we could go? It became very obvious we would littlerally just go back and forth enjoying the coastal lights, so lets just kick back and enjoy the ride. We did break up the evening by sending our parents a shot of some random lights, we could see on the horizon, and told them it was Iran! The responses back were hilarious, the things we Middle East expats think is funny, especially when we are egging each other on.

As my bed time, came and went, we started our final navigation back to the marina. In proper British fashion, when there is a charity event we of course part took in the obligatory raffle and were reminded that whilst this was all fun and deck shoes, there was a real reason we were all gathered.

The entire event was in aid of a local group called BFG (no not the whizzpopping friendly giant I suggested) but a project that looks to rescue the many abandoned, homeless or mistreated animals in Kuwait. Now I’m not an animal person but even I can’t ignore the plight of animals in this country and the poor state some are found in. Hearing stories of dogs abandoned on balconies to be found my the new tenant on moving day, only to realise their owner had just upped and left the country. It’s truly saddening to see and I am pleased to say that many have been rescued and re homed successfully.  So when we had all come together to support this charity of volunteers, that help foster dogs whilst forever homes can be found, either here or abroad, it was heart warming to see so many people trying to improve this situation.

We had had a great evening and throughly enjoyed the experience, one that will go down in our Kuwait memories for sure. What was great to hear was that all this had raised the most money ever raised by a single BFG event. Thankfully some good will come out of a bunch of people, larking about on a boat, in The Gulf on Friday 13th…..lucky for some little doggies after all.

6 thoughts on “Whatever floats your boat!”