Wow I really don’t know where time is going, can you really believe that Christmas is nearly upon us dear readers? Writing this post a little late this week as well, life has got in the way and as the big day approaches things have started to run away with me and with a week left in little island haven, I am starting to panic and get uber emotional. But on a happy note, as I review the last week and all that’s happened only one thing springs to mind…..what the F?! 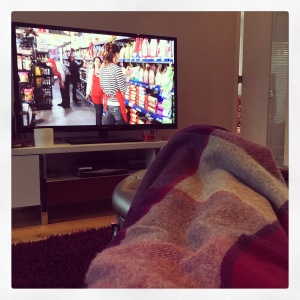 As my inner desert girl struggles to warm up and acclimatise to these wintry climes (don’t start telling me how mild it is for this time of year, its bloody freezing!) I have been fighting something for weeks now and then middle of last week BAM! I was struck down with the lurgie. I snuggled under the blanket on the sofa for days, dosing up on everything that Boots had to over and 25 quid later, I was still ill. To say I am a poor patient is an understatement, I hate not being able to do stuff and think that I am still invincible, not to mention it was getting in the way of baby cuddles. So when feeling slightly better, I took myself off for a run and nearly died. Well not literally, but it was like running through treacle and my chesty cough turned into a geriatric wheeze! Anyway you will be glad to hear I am slightly on the mend, but I still sound like I smoke 50 a day first thing in the morning.

This is a staple for us islanders, but one thing that makes living on an island unforgiving. When there is heavy fog you are stranded, the airport comes to a stand still, which means no mail, no newspapers and no one gets in and out. With the very changeable temperatures over the last few weeks, we have had a little spell of this island curse and other than having to have headlights on most of the day driving around, I haven’t really blinked an eyelid. However this weekend we were expecting my gorgeous cousin and her family, as they made their way from the UK to visit little princess P. So mum and I were up early to greet them off the first flight of the day, coffee was brewing, croissants warming and I was periodically checking the flight status online. Time was logged for its expected landing and when an hour had gone by and we had not heard from them, I checked. They had made it to Jersey, only to circle a few times attempt to land twice and headed straight back to London. The fog had descended and made it impossible for them and other flights that day to get in. The good news, they eventually got in the following afternoon and were able to enjoy plenty of baby cuddles and even a visit to Santa!

Friends
Just before the flu took me over, I did manage to have a fabulous evening with 3 old school friends. They last time we were all together was more years than we would like to admit, but as these four 30 somethings sat round the kitchen table, eating half our body weight in olives and nibbles, and so our 32 year old friendships carried on to the early hours. We laughed, gossiped and caught up, only wishing that it wouldn’t be next Christmas before we would be able to do it again. Thank you ladies, I know you will be reading.

So Saturday night came, with our planned guests postponed, mum and I settled down to watch Strictly. Suddenly the intercom went and I proceeded to listen to mum have a very confusing conversation with a delivery man. Long story short she thought he was delivering a take away and telling him he had the wrong house, he was trying to give her flowers!! Anyway after I had picked myself off the floor laughing in she walks with an enormous bunch of flowers.

Me: Oh how gorgeous who got you those?
Mum: They are for you not me
Me: What!? Wonder who they can be from
Mum: Probably your husband
Me: Don’t be silly he never sends me flowers

This followed me opening the card and seeing 2 words

I tried very hard to keep it together and immediately got on the phone to Hubby to thank him for his epic romantic gesture which had me completely overwhelmed. Not only were they stunning flowers but also from my favourite florist, who had even done my wedding flowers, which made me love it even more. I do miss you terribly but this made my day, week and month.

My daily movie has continued but I nearly had a melt down today. I thought I had thrown away the DVD remote and that would mean that the pile of DVD traditions could not be watched. When I say melt down I mean it,

I was literally going through bin bags (twice!)

to find it because I would have literally cancelled Christmas if I couldn’t watch Miracle on 34th Street on Christmas Eve. Panic over the remote has been retrieved and the Valium is back in the cupboard.

My desert girls are all heading back home countries for family festivities and plenty of mulled wine and bubbles if I know them. Here I have my annual Christmas night out with my bestie, God Son christmas present deliveries, the big food shop with mum, collecting fresh presents from their artisan makers Saturday morning, then we are closing the door and enjoying the over indulgence.

So to you all, whatever you are doing or celebrating, I hope you are with the people you love and here is to 2017.